I don’t know about you, but I only have to hear the word ‘festival‘ and I start to feel ill. They normally end up as a gruelling test of stamina, when your body is pitted against alcohol, drugs, junk food and overexertion for an assault course lasting several days. The worst thing for me though is the lack of sleep.

Although in my 30+ years I’ve been known to party hard, at least part of the reason I’ve been able to do that is because whereas most people got up in the morning to play rugby for the school team, go to lectures, or head into the office, from my school days up to the present I always stayed in bed instead… allowing my body the full recovery it needed. 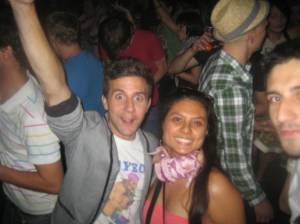 Festivals however rarely allow for that. I always get sucked in on the first day to the party atmosphere and, having drunk my way through the concerts, only leave the dance stage when they switch the music off, followed by a struggle back to my tent/apartment/house. Instead of a lie-in though the temptation is always to get up the next day as early as possible in an attempt to see that important concert and get the first beer of the day in. Things like breakfast and lunch quickly get bypassed, and before I know it my insides have been liquified, my ears are bleeding and my legs are knackered from too much dancing and walking between stages – always on the opposite sides of humungous fields.

So it was with Primavera Sound Festival. In some kind of sick nervous anticipation my stomach managed to go AWOL before the first note had even been played – as if it knew what was in store – and so pumped full of Immodium I made my way to the Parc del Forum, queued a f@cking hour and a half to get my media pass (missing Of Montreal in the process!) and then launched myself into the swing of things. To begin with I trudged around the stages following the big names… (and, whereas I can’t be bothered to review the music, I must say each of the stages were awesome set ups. I’m not sure anyone really knows what the architects of Parc del Forum were thinking when they created this concrete monstrosity on the edge of the city, but Primavera has certainly found a great purpose for it. In particularly the ATP stage (?) where Caribou played was perfect, set in a little dip with trees on one side and an expansive staircase/seating on the other, moon rising behind. Ahhh!)… but my favourite part of any festival is always the mash up at the end. On the first night this kicked off with El Guincho at the Llevant stage at around 3.30am. I nearly missed the gig after not realising there was no way through from ATP, but nimbly avoiding the securty guard I climbed over the wall and slid down the nicely curved 20ft parapet to the encouraging cheer of passers-by – burning a hole in my, admittedly cheap and crappy, jeans. After rocking out to Bombay and other El Guincho specials, cheesemeister general Girl Talk let rip with some crowd pleasing mash-ups that get us going until 6am…

The next day, wanting to soak up the day vibe, I got there a bit earlier – for Warchild I think – and once again patiently endured the big names. I’m not really a concert person. Just buy the CD… it sounds better and costs less. The vibe was good though and I sunk into some beers as the sunset. When nighttime came I went to check out the Pitchfork arena, but the music was a bit too dark and the people a bit too weird… so back to LLevant it was this time for Carte Blanche. There was a decidedly 90s vibe to their set, esp. with the co-ordinated black and white strips and dancing rollerskaters! Still the music was excellent and the feet kept going until around 5am when they kicked us out…

And then came the tricky third day. It’s usually by this time that my body gives up on me. Surprisingly my stomach wasn’t the first to go, but my legs. The Main Stage and Llevant stage are miles apart and it seemed that on both friday and saturday the best concerts were alternating between the two (plus of course there was the Champions League final, which was shown on a big screen at Llevant)! Factor in the previous days dancing and my advancing years and when, at 2am, I was faced with a choice of warm comfy bed or DJ Shadow I trudged off to get the metro, 90% sober, and 100% dead.

A quiet night out Zaragoza style

And if I thought that was bad, then came Sonar. Having overdone it on the mojitos and beers on the very first day session, I work up worse for wear on Friday only to find that the organisers had decided to upgrade my free media pass to include night sessions as well. I was too scared to say thank you in case it was all a big mistake and ran out of the office clutching my new shiny pass, without so much as a backward glance. With night sessions to account for too I was determined to eat something and lunched on a surprisingly good Sonar sandwich (3.5 euros) before hitting the drinks, dancing, napping and rocking up to the Sonar by Night party. If Sonar by Day had had it’s fair share of chemical romance (not me I might add) then By Night was effectively sponsored by Disco Dust. Not one to buy sweets from strangers I opted for the vodka red bulls instead which gave me the energy I needed to mosh heavy metal style with a load of scary-looking guys to Dizzee Rascal ‘Bonkers‘. Unfortunately teh same vodka and red bulls meant that when I got back at 6 or 7am I couldn’t sleep… so Saturday day session started worse for wear and was conducted on nothing more than a bottle of water and two cereal bars. Actually it was probably the best day session, because it meant I didn’t spend half my time queuing for the toilet! I did watch enviously as my new friends from Zaragoza (side note, check out the Manuscript Found in Saragossa for one of the best books you never read!) guzzled beers at a scary rate, and some other substances too, knowing that if I joined them I would keel over instantaneously.

I probably would never have made Sonar by Night on the Saturday if I hadn’t met a cute Belgian girl the night before… both exhausted we persuaded ourselves to get a taxi over and at least check out some of the bigger bands! In the end it turned out to be an exhausting but fun night, with Buraka Som Sistema the highlight as well as some loopy dancing to dubstep courtesy of Magnetic Man… sadly nothing happened with the Belgian girl in the end, but then again that’s probably for the best. By the end I’d truly run out of energy.

Posted in Experiences, My Life

Summer: The Story So Far…

Yes, it’s been a long time since my last post but then again, who can blame me? It’s summer in Barcelona and I’ve got a tonne of much better things to do than type up ditties for you guys. (In fact I was planning on being on the beach playing volleyball right now but a rogue bit of Barcelona rain has put paid to that!).

Summer really is a non-stop party everywhere in Spain, but Barcelona in particular. You can place the start of the season where you like but I think a good a landmark as any is the Primavera Sound Festival (official website). Naturally I was too poor to go to the whole shebang, but after seeing a post on Couchsurfing I bought a night ticket for the Friday for some mash-up dubstep sounds. Being older than the average woolly mammoth’s tusks (btw did you know there’s a mammoth museum in Barcelona??? Something on that another time!) my knowledge about the genre and artists was vague at best but I must say dubstep rocks! Diplo, who seems to be the crowd-pleasing guru of dubstep if this show was anything to go by, seems to encapsulate the basic concepts of the art form fairly well. His set basically consisted of well known dance and hip hop tracks with a ridiculous fat bass throbbing underneath all the mid and high notes. For me Joker was much better, with really deep almost emotional (yes, I was drunk) introspective style of original tracks. I guess he is the LTJ Bukem (who I met incidentally in Krakow, when I was high of my nuts.) of the genre… anyway much fun had by me and the two lovely CS girls I went with, and next year gonna hopefully have the dinero for a full week ticket.

That was the last week of May, but things really hot up in Barcelona, literally and figuratively speaking, in June. First up is the Sonar festival (official website). Again a limited supply of euros stopped me from snapping up a ticket for the whole weekend (it’s a three day, two night event), but me and my ex-companero de piso and compadre in crime, Albert (aka Big Al), decided to repeat 2009’s shenanigans by attending Sonar By Day on the Saturday. This year I took it much easier (went a bit OTT in 2009!) and as usual Barcelona’s cool cats were out in droves, raving in the sunshine at the MACBA. Good times even if the only act I had heard of was Uffie, and she was fairly pants to be honest. Oh well.

Most people need weeks to get over Sonar festival, but unfortunately by now the parties are coming thick and fast. Just a couple of days after Sonar finished came Sant Joan – the most famous party night of the year… but I might save that for Barcelona Summer part dos. Adios for now amigos…

Posted in Experiences, My Life